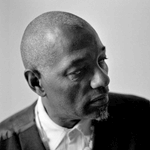 Terry Adkins was an interdisciplinary artist, musician and cultural practitioner engaged in an ongoing quest to reinsert the legacies of unheralded immortal figures to their rightful place within the panorama of history.

Under the auspices of the Lone Wolf Recital Corps, he staged emblematic installation-based experiences that utilized a variety of real time and static media.

“Illinois State University was the nourishing cradle of my blossoming vision of the world.” - Terry Adkins