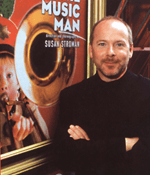 Ray Roderick (Writer/Director/Choreographer) has most recently conceived/written and directed ‘S WONDERFUL! THE NEW GERSHWIN MUSICAL for the Gershwin Estate and touring 2010/2011. He has written/directed/choreographed THE BIKINIS...A NEW MUSICAL BEACH PARTY! Touring 2011/2012. Ray adapted the script and directed the 1st US National and UK tour of CHITTY, CHITTY, BANG, BANG now licensed by Music Theatre International. He was associate director of A CHRISTMAS CAROL at Madison Square Garden for Six years, where he was privileged to work with original director Mike Ockrent. He was also associate director for Susan Stroman’s Broadway revival of The Music Man, and subsequently directed the successful 3 year North American Tour. He co-wrote, directed, and choreographed Irving Berlin’s I LOVE A PIANO (Carbonell Award nomination best choreography, Florida Stage) now heading in its 3rd year of National Tour and heading to japan. Off-Broadway, Ray directed and co-wrote the new musical THE PRINCE AND THE PAUPER (published by Samuel French), and directed and choreographed THE ARK, LAMOUR THE MERRIER and THE STORY GOES ON. He also co-wrote, directed, and choreographed HAVEN HELP US! (Carbonell Award nomination, best new work, Florida Stage), A CHRISTMAS SURVIVAL GUIDE (published by Samuel French) and I LOVE NEW YORK (Bistro Award, Best Musical Review 1999(. Ray was the founding artistic director of Tri-State Center for the Arts, where he remained at the helm for seven years. With partner James Hindman, he formed Miracle or 2 Productions (Miracleor2.com), a licensing and production company dedicated to the creation and development of the new American musical. Together, they have written new musicals ARE WE THERE YET?, COMING TO AMERICA, and THE BIKINIS! At the Denver Center Ray has directed and choreographed THE LAST 5 YEARS, THE TAFFETAS, and I LOVE YOU, YOU’RE PERFECT, NOW CHANGE! (longest running show in Denver history).

Ray begins his twelfth year as creative director for the United States Tennis Association’s US Open, where he creates on court ceremonies for ESPN and CBS live television and is the Director of ARTHUR ASHE KIDS DAY for CBS. He wrote the English adaptation and directed the CHinese production of CHUN YI, THE LEGEND OF KUNG FU now in its fifth year in Beijing and has toured Japan, Russia, and played on the West End at The London Coliseum. Ray directed SINGIN’ IN THE RAIN and 42nd STREET at the Goodspeed Opera House, DAMES AT SEA at Bay Street Theatre in Sag Harbor, and directed and choreographed an all new Barnum for Westchester Broadway Theatre. He also directed BELIEVE, the award winning SHAMU (killer whale) show for SeaWorld in San Diego and will direct the all new Dolphin Show opening April 2011. As broadway performer, Ray was seen in many shows, including BARNUM starring Jim Dale and Glenn Close, and originated roles in GRIND, CATS, THE WIND IN THE WILLOWS, CRAZY FOR YOU, and A FUNNY THING THAT HAPPENED ON THE WAY TO THE FORUM starring Nathan Lane and Whoopi Goldberg. Ray is a graduate of Illinois State University, where he received a Bachelor of Science degree in the performing arts. He resides in New York, is married to Broadway actress Karyn Quackenbush, and is the proud father of SUNY Purchase student and lightning designer Jamie Roderick.