Professor of Guitar
School of Music 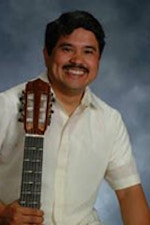 Angelo L. Favis has been an active performer of solo and chamber music, giving recitals in the United States and abroad. He has been a featured soloist with the Saigon Philharmonic Orchestra and the Philippine Philharmonic Orchestra. Angelo has given the world premieres of several works, most recently Roy Magnuson’s thin, blue smoke. He also performed the Illinois premiere of Stephen Goss’ Concerto of Colours with the Illinois State University Wind Symphony. Angelo has served as an adjudicator in several competitions and is himself a prizewinner in the American String Teachers Association National Solo Competition and the Eighth International Solo Competition sponsored by the Guitar Foundation of America. He has given master classes at the University of the Philippines, Roosevelt University, Mahidol University in Bangkok, Thailand, and the Ho Chi Minh City Conservatory of Music in Vietnam. Angelo has recorded two solo CDs, Philippine Treasures, Vols. 1 & 2; both are available worldwide on the VGO label. He earned his B.M. and M.M. in Guitar Performance under Lawrence Ferrara and David Tanenbaum at the San Francisco Conservatory of Music, and his D.M.A. from the Manhattan School of Music under Nicholas Goluses and David Starobin.

499.001Independent Research For The Master's Thesis