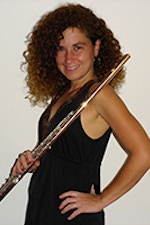 Kimberly McCoul Risinger is principal flutist in the Illinois Symphony and Chamber Orchestras and the Heartland Festival Orchestra. In addition, she performs in the Linden Flute and Guitar Duo, and the Sonneries Woodwind Quintet. Risinger has given solo performances in most of the major concert halls in New York City, including Carnegie Hall, Alice Tully Hall, and Merkin Recital Hall. An advocate of contemporary music, Risinger has played concerts throughout the United States, Europe and Canada, often presenting world premieres of new works written for and dedicated to her. Risinger’s two solo CD’s (Songs of My Nights—The Flute Music of David Maslanka, and Sonata Fantasy—Contemporary American Pieces for Flute and Piano) are available on the CD Baby Record label and on the Albany Records label. Risinger is Professor of Flute at Illinois State University.