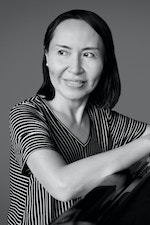 Vietnamese-American pianist Tuyen Tonnu is known for her sensitive command of timbral color, her singing lyricism, and striking style. She has graced the world's stages with solo and chamber music concerts in the U.S. as well as Asia and Europe.

As a champion of new music, Tonnu's performances have garnered praise for their powerful and insightful interpretations. Her collaborations have included premieres and works by Hans Otte, Tristan Murail, Sheila Silver, Libby Larsen, Jeffrey Mumford, Adrienne Elisha, Martha Horst, Lukas Ligeti, and Steven Rosenhaus, among others. For the past two decades, she has been the foremost interpreter of the piano music of the late Egyptian American composer Halim El-Dabh, presenting the premiere performances of many of his works. El-Dabh's first piano concerto was composed for and dedicated to her. In 2001, Tonnu was one of ten musicians selected from the U.S. to perform in Alexandria, Egypt for the inauguration of the Bibliotheca Alexandrina.

Other notable performances include collaborations with the Escher String Quartet and the Stony Brook Contemporary Chamber Players, the world premiere of Martha Horst’s Piano Concerto No. 1 with the Illinois State University Symphony Orchestra, and the U.S. premiere of Roque Cordero’s Piano Concerto No. 1 with the Texas Christian University Symphony Orchestra. In 2020, Tonnu’s solo commercial album, Roque Cordero: The Complete Works for Piano Solowas released on the American/British label Albany Record. The CD has received rave reviews in Fanfare: The Magazine for Serious Record Collectors(March/April 2021) and in the American Record Guide(March/April 2021).

Piano music of the Classical and Contemporary periods