Professor of Bassoon
School of Music 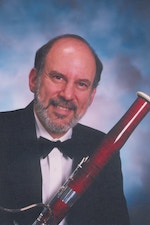 Mr. Dicker has earned degrees from UCLA, The University of Michigan, and The Juilliard School. Mr. Dicker's performing career began with the United States Military Academy Band at West Point. During his tenure as Associate Principal Bassoonist of the Neu Westphalische Philharmoniie (Gelsenkirchen, Germany) Michael also performed as guest bassoonist with Belgian Radio Symphony, Dortmunder Oper, Deutsche Oper am Rhein, Philharmonia Hungarica, and Deutsche Bach Solisten. Since 1979 Michael has served as International Representative for Fox Products Corporation, prominent maker of bassoons and oboes. In this capacity, Mr. Dicker has presented clinics throughout the United States, Canada, Europe, and Japan. Most recently Mr. Dicker has served as recitalist and clinician for Fox at the first Asia Double Reed Society Convention in Bangkok, Thailand. Mr. Dicker has been a member of the faculty of the Illinois State University School of Music since 1986. He has performed with the Sonneries Quintet (Illinois State University faculty emsemble) in Europe and Japan and throughout the Midwest United States. He has performed as soloist with the Peoria Symphony Orchestra and Heartland Festival Orchestra both of which he serves as principal bassoonist. Michael is married to Judith Dicker, Assistant Prof. of Oboe at Illinois State University. Their daughter Erica is a professional violinist and daughter Talia is a professional Cellist.