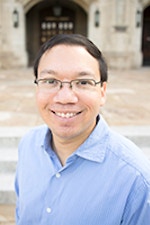 Praised for his “enviable grasp of orchestration,” award-winning composer Roger Zare holds degrees from University of Michigan, Peabody Conservatory, and University of Southern California. Zare is often inspired by science, nature, mathematics, and mythology, and embraces interdisciplinary collaboration. His compositions have been performed on five continents, and has received awards from ASCAP, BMI, the American Academy of Arts and Letters, and others.