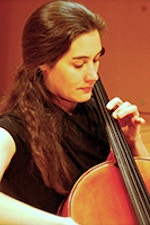 Adriana La Rosa Ransom is currently Interim Director of the School of Music at Illinois State University, where she was cello professor for 14 years. She received a Bachelor of Music degree in cello performance from the University of Missouri, where she studied with Nina Gordon. She earned Master and Doctorate degrees in performance from the University of Minnesota, studying cello with Tanya Remenikova and chamber music with Jorja Fleezanis. As a soloist, Ms. Ransom has recently appeared with the Peoria Symphony Orchestra, the Illinois State Wind Symphony, and the Illinois State Symphony Orchestra. She has also appeared as a guest artist on notable solo and chamber music recital series, including the Peoria Bach Festival, Chicago Cello Society concerts, the Trinity Lutheran Candlelight Concert Series, and at universities throughout the Midwest. Currently Principal Cellist of the Peoria Symphony Orchestra, she formerly was a member of the Minnesota Opera Orchestra, the St. Cloud Symphony (MN), the European Musical Festival Orchestra (Germany), and Sinfonia da Camera (IL). Ms. Ransom has served on the faculty at Gustavus Adolphus College, St. Cloud State University, the MacPhail Center for Music in Minneapolis, and the Grumo (Italy) Music Festival. She is the recipient of the University Outstanding Teacher Award, University Outstanding Service Award, and the Illinois American String Teachers Association Distinguished Service Award, among others. She is an invited presenter at the American String Teacher National Conference, covering topics such as David Popper’s character pieces, supplementary etudes for intermediate level cello concertos, and the use of visual color as a means towards musical expression.