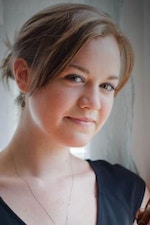 Praised by the San Francisco Classical Voice for playing "with maturity and panache," Dr. Cora Swenson Lee is a cellist and baroque cellist who performs actively around the United States. She holds a Doctorate of Music in Cello Performance and Bachelors Degree in Cello Performance with highest distinction from the Eastman School of Music, as well as a Masters Degree in Cello Performance from Boston University College of Fine Arts.
A passionate educator, Dr. Swenson Lee is currently Instructional Assistant Professor of Cello at Illinois State University, adjunct Professor of Cello at Illinois Wesleyan University, and the director of the Eastman Cello Institute.