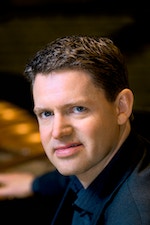 Geoffrey Duce is Coordinator of the Piano Area at Illinois State University. As a pianist, he has performed in Carnegie Hall, Berlin’s Philharmonie and Konzerthaus, London’s Wigmore Hall, Manchester’s Bridgewater Hall and Edinburgh’s Queen’s Hall, as well as across Europe, and in Japan, Hong Kong and Taiwan.

His career has featured both solo and collaborative performances: As a concerto soloist he has appeared with the Sinfonie Orchester Berlin, the Chattanooga and Olympia Symphony Orchestras, the Scottish Sinfonia, Edinburgh Philharmonic, New York Sinfonietta, and the Dundee Symphony Orchestra. He was the Peoria Symphony Orchestra’s first Artist in Residence for the 2018-19 season, including performances of concertos by Mendelssohn, MacDowell, and Duke Ellington.

As a chamber musician and accompanist he has recorded for BBC Radio 3 and performed at the Library of Congress in Washington, D.C. He won the Young Artists Award from Britain’s National Federation of Music Societies, and was awarded the Prix de Piano at the American Conservatory in Fontainebleau, France.

He has given masterclasses at institutions including Hawaii University, St. Thomas University in New Brunswick, Canada, Shorter and Darton Colleges, Georgia, for the Orquesta Filharmónica in Bogota, Colombia, at the City of Edinburgh Music School, the Academy of Music Northwest in Seattle, and in the Middle East. During the summer of 2016 he was an International Visiting Faculty member at the University of Taipei, and has taught at Tunghai University in Taichung, Taiwan. In 2019, he was a faculty member of the inaugural Global Immersion Program at SouthWest University in Chongqing, China, and judged the American Classical Pianist International Competition in Hangzhou. He has also served on the faculty of the Chicago Chamber Music Festival.

Originally from Edinburgh, Scotland, Geoffrey initially studied at the Royal Northern College of Music and Manchester University before receiving a DAAD scholarship to the Universität der Künste, Berlin. He received his doctorate from the Manhattan School of Music, where he was also a faculty member, and has previously held positions at the State University of New York (Westchester Community College) and at Indiana University South Bend. His major teachers have included Renna Kellaway, Klaus Hellwig, Ferenc Rados, and Phillip Kawin.