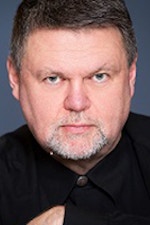 In 1997, John Michael Koch began teaching at the Wonsook Kim College of Fine Arts at Illinois State University's School of Music in Normal, Illinois, where he has been nominated to Who’s Who in America in 2008 and 2009, and three times to Who's Who Among America's Teachers and has served as Voice Area Coordinator in the School of Music since 2009.

Koch has performed over 35 operatic and 50 oratorio roles throughout the world. He is Artistic Director, Co-Founder and resident conductor of MIOpera that had its inaugural season in 2011 with Mozarts’s Die Zauberflöte. Subsequent seasons included Don Giovanni in 2012, Le nozze di Figaro in 2013, Bizet’s Carmen and Dan Shore’s The Beautiful Bridegroom in 2014, La cenerentola and Hansel and Gretel in 2015, Falstaff and The dialogues of the Carmelites in 2016, Les contes d’Hoffmann and Pirates of Penzance in 2018, and La bohéme and Die Fledermaus in 2019. This summer opera program was created to give young emerging singers from all over the world the opportunity to stage and perform complete operatic roles. The program is growing rapidly and has hired opera professionals such as Maestro Joshua Greene from the Metropolitan Opera, Lucy Arner of the Mannes School of Music, Liora Maurer of the Metropolitan Opera and James Marvel, Director of Opera at UT-Knoxville to lead our participants in fully-staged productions. MIOpera has received several generous grants from the Town of Normal Harmon Arts Grants Fund and the Illinois Prairie Community Foundation Mirza Arts and Culture Fund and was proud to offer this unique opportunity to central Illinois audiences.

As a soloist, Prof. Koch is noted for his interpretation of Orff's Carmina burana. Noted performances of the Orff include Chicago’s Orchestra Hall with the Chicago Sinfonietta, Caracas Contemporary Ballet (Venezuela), Karmi'el Dance Festival in Israel (Tel Aviv Opera and Jerusalem), Chautauqua Institution, Cincinnati Ballet, Princeton University Symphony and Glee Clubs, the Southwest Michigan and Green Bay Symphony Orchestras, the Montréal Philharmonic, the Canadian Ballet and Illinois State University. Other abroad performances include the title role in Mendelssohn’s Elijah in Cairo, Egypt. His world premieres of David Maslanka’s A Carl Sandburg Reader and his Symphony No. 9 have been released on CD by Albany Records. Another world premiere presented a Daron Hagen work based on the famous Civil War letter of Major Sullivan Ballou to his wife Sarah entitled: The Banner of my Purpose. Performances of the work were given at Illinois State University, Western Illinois University and Pacific Lutheran University with Prof. Koch as featured soloist with military band. Local solo performances have included Verdi’s Requiem, Elgar’s The dream of Gerontius, Britten’s War Requiem, Rossini’s Stabat mater, Haydn’s Creation, Walton's Belshazzar's Feast, Mozart's Requiem and Coronation Mass, Beethoven's Missa Solemnis, Brahms' Requiem, Mendelssohn’s Elijah and Handel's Messiah. He maintains a full voice studio in addition to conducting the ISU Civic Chorale since 2010.