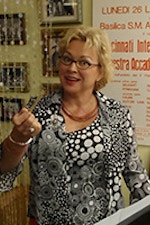 Dr. Michelle Vought has earned an excellent reputation throughout the world in a variety of venues from concert hall to opera house to cabaret. A specialist in contemporary music, the soprano performs and records widely both nationally and internationally. She has been invited to perform/lecture in Brazil, Austria, Switzerland, Ireland, the Czech Republic, Slovakia, Canada and throughout the USA and has done ten recordings for the international Vienna Modern Masters label. A champion of the music of Austrian composer Dr. Nancy Van de Vate, Vought authored a book entitled The Theatrical Vocal Music of Nancy Van de Vate which was released in 2015. She has performed many Van de Vate world premieres including two pieces written for her, "Venal Vera" and "Cleopatra and the Plastic Surgeon." In addition, Vought has toured her unique and popular one woman show entitled Madame Monsieur for which she has attained great national acclaim. A two-time cancer survivor, Vought has singlehandedly raised over $13,000 through her many benefit concerts. A graduate of Gettysburg College (BS) and Converse College (MM), Vought completed her doctorate at the Conservatory of Music at the University of Cincinnati.