Professor
School of Theatre and Dance 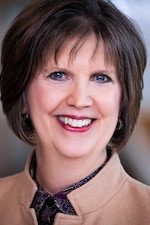 Janet Wilson joined the acting faculty at Illinois State University in 2001 to teach Acting I, Acting II, Realism, Auditioning, and On Camera. Stemming from her research interest in contemporary female playwrights, she developed a Text and Context course on this topic. Prior to her career at Illinois State, Janet spent over a decade in New York City where she trained extensively in the Sanford Meisner Technique of acting. She worked professionally in theatre, film, and television and earned membership in the professional talent unions. In 1986 she established a Meisner acting studio and later taught for the Riverside Shakespeare Company. After a move to Richmond, VA, she was a Founding member, Co-Artistic Director, and Director of Education for the Firehouse Theatre Project, a professional theatre in Richmond where she produced and directed numerous productions from 1993-1998. While earning her M.F.A. from Virginia Commonwealth University, she developed a research interest in contemporary women playwrights. She has directed over 35 productions and is a published and produced playwright. Her directing credits include A Piece of My Heart by Shirley Lauro for the AmeriCulture Arts Festival in Massachusetts, Roosters by Milcha Sanchez-Scott, Hopeless Spinning by Margaret E. Iha, In the Blood by Suzan-Lori Parks and The Coffee Bar by Ali Salem. Ms. Wilson collaborated with her Illinois State colleagues to create a critically acclaimed production that toured nationally for over six years. Shame the Devil! An Audience with Fanny Kemble by Anne Ludlum featuring Lori Adams is about nineteenth-century British actress, author, abolitionist, wife, and mother. During the summer of 2009, Janet worked with the “Acting Out” Theatre Troupe at Lincoln Correctional to create and perform an original script, A Theatrical Ritual for Incarcerated Women. Her conference paper, Going Public in Prison: Empowering Incarcerated Women On and Off Stage, was delivered at the 2010 Mid-America Theatre Conference. Her subsequent article, Agency through Collective Creation and Performance: Empowering Incarcerated Women On and Off Stage, was published in the spring 2013 issue of Making Connections: Interdisciplinary approaches to cultural diversity, a publication of the Pennsylvania State System of Higher Education and the Frederick Douglass Institute Collaborative. Ms. Wilson was selected for Illinois State University’s inaugural Leadership Institute, 2010-2011, while serving as the Interim Director of the School of Theatre and Dance and Interim Producer of the Illinois Shakespeare Festival. She went on to serve as the School’s Director and the Festival’s Producer from 2011-2019, during which time she spearheaded the reaccreditation process for theatre for the School of Theatre and Dance with the National Association of the Schools of Theatre (NAST). She was promoted to full Professor in May, 2014. She presented several workshops for new theatre administrators organized by NAST and served as the lead facilitator for the University Resident Theatre Association (URTA) on a contract negotiation with Actors’ Equity Association in New York City. Spring 2020 marks her return to the acting area. Her current research project is writing a play based on 62 interviews conducted by Dr. Maria Schmeeckle (Department of Sociology and Anthropology at Illinois State) about childhood rebellion.