Professor of Acting
School of Theatre and Dance 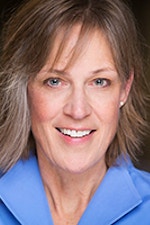 Lori Adams is Head of the Acting Program at Illinois State University. There are few things that bring Lori more joy than teaching students the art of acting. A veteran of the classroom, Professor Adams has taught at ISU since 1997 where she takes special pride in the fact that she develops a personal relationship with each one of the more than 120 acting students (all of which she will eventually teach in the classroom). Other opportunities to work one-on-one with students are provided through her advisement of FreeStage (student-producing theatre RSO) and coaching of the highly-coveted Irene Ryan Acting Award competition for the Kennedy Center American College Theatre Festival. As an actor, Adams has appeared in Caesar, Pride and Prejudice, Henry V, Twelfth Night, Hamlet, Richard II, Richard III, Macbeth, and Henry VIII for the Illinois Shakespeare Festival; Ann Kron in Well and as Fay in Iron; Susan in Woman in Mind; Patrice in A Fair Country; Agnes in Tiny Island and Maureen in The Beauty Queen of Leenane at Heartland Theatre Company. From 2003 - 2014, she successfully toured throughout the United States and Canada, her one-woman show, Shame the Devil! An Audience with Fanny Kemble. Other acting credits include: Nebraska Repertory Theatre, Breadline Theatre Group, Actors Theatre of Phoenix, Actors Lab Arizona, Childsplay Inc., Mulebarn Theatre and the Stockyards Theatre Project. As a director, Adams’ production of Falling opened Off–Broadway in 2012. Uniformly acclaimed by New York critics, “Lori Adams, the director, has wrenched every ounce of juice from its reservoir of emotions, like water from a dish towel.” (Rex Reed; The Observer); the show garnered three Drama Desk nominations. Other directing credits include Mustard Seed productions of Human Terrain, Falling and Fires in the Mirror. Lori is always excited to direct her students in productions at ISU which include: Sweat, A Lie of the Mind, 1776, One Flew Over the Cuckoo’s Nest, Pride and Prejudice, Dancing at Lughnasa, The Grapes of Wrath, Picnic, To Kill a Mockingbird, Tommy, Crimes of the Heart, Evita, A View from the Bridge, and The Diary of Anne Frank. Lori is a proud member of SDC (Stage Directors and Choreographers).