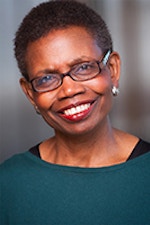 Hello, my name is Leslie Sloan Orr, and I am the Illinois State UniversitySchool of Theatre’s primary Playwriting and African American Theatre professor. I am also the Artistic Director for the School’s Crossroads Project, a multicultural theatre that encourages and explores performances and events that address the issues and experiences of ethnic minorities in the United States and the experiences of international cultures, including Asia, the Middle East, Africa, Latin America, and indigenous peoples of the world (AMALI). I am also the recipient of the ISU (2003) Office of Intercultural Programs and Services’ "Outstanding Faculty Award". Currently, I am revising my screenplay, "Song for a Dark Girl," which dramatizes the struggle of a Black woman in the land of Lincoln, Springfield, Illinois.

Before joining Illinois State University in Fall 2000, I was an Assistant Professor of Directing and Multicultural Theatre at Indiana State University in Terre Haute. In 1997, I created the Theatre Department’s Black Theatre Program -- making Indiana State the only traditional institution of higher education in the State of Indiana with a Black Theatre Program. Other credits include writing and directing "Goin’ Underground," a 15-minute video and 30-minute children’s play dramatizing an enslaved family’s search for freedom via the Underground Railroad. My credits also include founding the Eastside Theatre in Springfield, Illinois, for which I was named by former President George H. W. Bush one of his "Thousand Points of Light." I hold a Ph.D. from Wayne State University in Detroit. My dissertation is entitled: "Gender Role Strain in Selected Plays by August Wilson." I also hold an M.F.A. in Playwriting from Southern Illinois University in Carbondale.

In my spare time, I enjoy traveling and attending book fairs and museums, as well as cultural and sports events with my husband, Rickey (the first) and our son, Rickey (the second).

154.001Introduction To Black Drama And Theatre