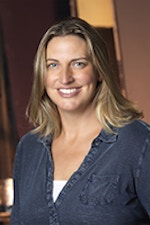 Mary Jungels Goodyear is an American Artist and Theatrical Scene Designer. She began painting landscapes and wildlife portraits at age eleven, exploring both acrylic and oil mediums. During her freshman year of high school, Mary’s painting of Havasupai Falls won first place in the state of Illinois, out of 11,000 entries. During her junior & senior years, she discovered her love of theatre & acting when she was cast in Riverdale's productions of Deadwood Dick, Lil Abner, and Criss Crossed Lovers. Mary developed her work in the visual arts throughout high school, enrolling in oil painting classes at Augustana College in Rock Island, IL. During her senior year she won first place at Marycrest College in Iowa with her acrylic painting of the Colorado River.

Mary continued her education in the College of Fine Arts at Illinois State University in 1990. Inspired by the landscapes of the Western U.S., she attended the University of Montana during her junior year of studies through the National Student Exchange. When Mary returned to ISU her senior year, she was commissioned to design & paint a mural of fantasy for the Normal Public Library Children’s Department. She graduated with her Bachelor’s degree in Painting on May 14th, 1994.

Discovering the face is another canvas, Mary pursued a career in professional make-up artistry. Educated at the Aveda Institute in Milwaukee, WI., & Professional Salon Concepts in Chicago, IL., she created the looks for runway models at the Midwest Beauty Show for Paul Mitchell & Brocato. Mary enjoyed working on location for regional commercials, videos, & photographers in Bloomington & Peoria. Moving to Eugene, OR in 1998, she continued working professionally as a make-up artist & manager for Lancôme Cosmetics.

In the fall of 2001, Mary’s art entered another dimension when she pursued her MFA in Theatrical Scene Design at the University of Oregon. She discovered new mediums working in collage and watercolor during her course of studies. Mary received a Graduate Teaching Fellowship, teaching technical production and scene painting, while working in scenery construction & set design. In the afternoons she devised Art Exploration courses at Springfield Middle School & Brattain Elementary, and worked as a scene designer & scenic artist for the Madd Duckling Children’s Theatre.


In June of 2004, Mary attended the Broadway Lighting Master Classes in New York, where she learned innovative design techniques from Broadway’s top lighting designers. She completed her MFA in 2005 with her set design & scenic artistry for Arthur Miller’s A View From the Bridge, along with her illustrated thesis: Converging Urban & Domestic Landscapes. After graduating, Mary was hired by the University of Oregon School of Music as the technical director, set designer, & scenic artist for Mozart’s The Marriage of Figaro.


In the summer of 2006, Mary started her own design and painting business, Atmospheres LLC, expanding in areas of Graphic Design, Interior Color Design, and Watercolor Illustration. Her watercolor of Albuquerque, New Mexico was published by Do Life Right Inc., for Cody Greene and the Rainbow Mystery in 2010.


Mary brought Atmospheres LLC to the Heartland when she returned to Normal, IL in 2011. Some of her recent work includes a series of painted landscapes for the Citizens Bank of Chatsworth, graphic design for local & regional clients, & children’s book illustration. In May, 2014, Mary exhibited Layered Landscapes, her series of oil, acrylic, & watercolor paintings, at Illinois Wesleyan University’s Wakeley Gallery.

Mary continues working professionally as a set designer and scenic artist, most recently for Saint Lawrence University’s musical production of Spring Awakening. In September, 2018, she travelled to New York for a residency at SLU to paint the set in preparation for the show’s November 7th opening. In addition to her active studio and design work, Mary is an Instructional Assistant Professor at Illinois State University in the School of Theatre and Dance, where she teaches Scene Painting & Scene Design.

University of Oregon
Eugene, OR

Hult Center for the Performing Arts
2005